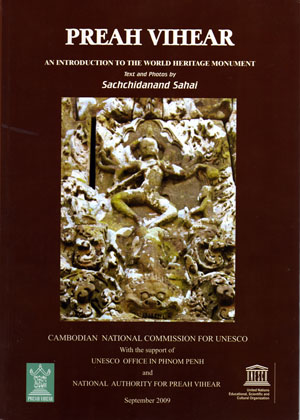 An Introduction to the World Heritage Monument

High atop the Dangrek Mountain range in North Central Cambodia lays a temple of such splendor that it was finally selected as a World Heritage monument by the World Heritage Committee in 2008. Ever since the Vietnam War and the infiltration of the Khmer Rouge into Cambodia this mountain temple has been difficult or impossible to visit with the exception of a few years in between the border skirmishes which even today prevents access to this mountain temple dedicated to Lord Shiva known as Shikhareshvara (Lord of the Peak).

But even with these latest border skirmishes between the Thai and Cambodian governments fighting over land disputes that the temple resides on Sachchidanand Sahai, the foremost authority on the Khmer civilization and scientific advisor to the National Authority for the protection and development of Preah Vihear, has published his findings in his new book on Preah Vihear bringing to light an updated overview of the history and purpose of Preah Vihear as a result of extensive field work and synthesis of many Sanskrit and Khmer inscriptions found throughout the temples of Cambodia and Thailand.

Without going into too many specifics, Dr. Sahai has uncovered many new inscriptions thus over turning the scholarly opinions of many French explorers who have preceded him such as Lunet de Lajonquire, George Groslier and Henri Parmentier. It is Sahais narrative style explaining his findings which allows the reader to follow his research within a life like story line enabling the reader to more easily imagine what life may have been like for the Khmer rulers and holy men over 1000 years ago. It is this story telling aspect of his research I will focus on. What sets the stage for this life like story is a full description of the Dangrek mountain range that separates the Mun Valley in Thailand and the fertile plains leading further south into Cambodia. The entire area around the mountain temple was closely inspected revealing a vast network of both temples and hospitals serving the vast distances the dignitaries had to travel in supervising their empire.

Futher inspection by Sahai focuses on the architects who planned and built Preah Vihear, but at the time of the temples construction Preah Vihear was known as Shikhareshvara. Sahais extensive knowledge of temples built in India reveals that this is the only temple where Lord Shiva is attributed to being the called "Lord of the Peak". This said, the mystery of uncovering what this temple served within the Khmer Empire takes on a new understanding to what exactly was the intent of Shikhareshvara.

Each level of the temple was built on a North South axis, which classifies the temple as an axial temple similar to Vat Phu and Phnom Rung. However, the temple may have been considered from a much wider context suggesting that both East and West developments of the temple also served the purposes of the temple priests and royal monarchs. One such exploration Sahai spent more time analyzing was the Eastern staircase accessed from the Southern base of the cliff under the temple. It was here Sahai found an extensive use of stones creating stairs leading to the first gopura on the North South axis leading to the main temple prompting Sahai to believe that the approach to the temple from the Eastern staircase was a very significant spiritual journey for the aspirants visiting the temple.

Once the pilgrims arrived at the temple Sahai once again sees more than those explorers that preceded him. The nagas on the top of the first stair case face north extending the power from the Angkorean capital at Angkor Wat and not at all turning their backs on Angkor Wat. Through each level along the axial pathway Sahai explains in great detail why the artisans have carved images from Indian mythology. Sahais focus finally reaches the top most temple where Lord Shiva is seen dancing his eternal dance on the head of an elephant. Here is where Sahai spends a great deal of time explaining the significance of the ten armed Shiva and citing other temples in the Angkor complex which also depict the ten armed Shiva. Inscriptions reveal that a dancing Shiva statue was carried from temple to temple as an indication of the reverence the long lineage of Kings had for their Lord. Shiva dancing in the sky becomes a refrain and a song to Lord Shiva fills the text so the reader gets the full experience of Lord Shiva abounding with his destructive energy to ward off all evil around Shikhareshvara.

A scene is created where beautifully woven fabrics cover all the path ways and towers for the Kings and high priest to walk upon and behind the top most sacred temple a rice paddy burning ceremony takes place which is the same ceremony that can be seen to this day throughout Cambodia. These are only a few of the vivid impressions Sahai leaves with the reader making the text more than just a factual account of temple life but a personal excursion into the deep recesses of time to relive a few moments of sacred ceremony and life styles within the temple complex.

The most fascinating of all Sahais exhaustive explorations, as well as his ability at synthesizing the many inscriptions found on door jams and stelae in the Dangrek area, is the relationship between the Cham temples in Vietnam, Vat Phu in Laos and finally Preah Vihear. Especially is the account of the joining of Shiva- Bhadreshvara of Vat Phu with Shri Shikhareshvara. The story of how these two aspects of Shiva were wedded at Shikhareshvara is alone worth reading the book. The link Sahai makes between the temples of Vat Phu and Shikhareshvara demonstrates the importance and the depth of devotion which existed around Lord Shiva between the tenth and twelfth centuries and how through analyzing the inscriptions one can also see how the sacred foot prints of Lord Shiva were placed at key locations in the empire. This act alone is the key referent to the holiness of the land which the high priest Divakarapandita, the most powerful high priest at the royal court of Angkor, initiated through the kindom and especially at Preah Vihear.

Many associations are made to the physical home of Lord Shiva residing in the forests around Preah Vihear. His real home on Mt Kailasa in the Himalayas provides a backdrop in understanding the influence this Hindu deity held of his devotees so very far away from his authentic home. An exact account of the families who worked around the temple complex is also provided adding another realistic touch to appreciating what life was like during this time. The exactness of indicating where each temple inscription came from is provided for any researcher to verify, but in my mind what really comes through Sahais research is his piecing together all the inscriptions with his personal observations to unveil the deep sacredness which Preah Vihear held for the entire Khmer empire. In Sahais estimation this temple was a repository of all the sacred scriptures and the entire mountain top was in fact integrated into the architectural planning creating a home for hermits, ascetics, students, and holy men from all around the kingdom and beyond.

Sahais own photographic documentation leads the reader to see his view point where the natural surroundings were as equally important as was the architecture. Here set upon this protruding ridge over the Cambodian plains was not only a sacred temple but an honoring as well of the natural environment both fused together making Preah Vihear a place to commune with the Lord of the Peak (Shikhareshvara).

Shikhareshvara gave the Khmer empire a light that would ward off any opposition to the right to rule the people of the kingdom. It is ironic that even today Preah Vihear is in the cross fire of two nations who can not settle on the extent to which this temple extends into the country side without each side feeling one nation is encroaching upon the other. I was fortunate that in 2004 I was able to see Preah Vihear even though I had to pass through military check points in stark contrast to the intent of its early builders.

The cosmology of the early Indian sages was carefully incorporated into every aspect of the architectural design of Preah Vihear and with a tireless uncovering of all the inscriptions making reference to Preah Vihear, Sahai has brought to life the true purpose of this ancient Khmer temple providing a beacon of light so all the world can see the glory of Lord Shiva with a hope of peace and prosperity to once again reign in the Dangrek region.

Note: Dr. Sahai recently presented his findings at a conference in Cambodia titled: New Approaches to Old Texts: Cambodian Inscriptions in the Digital Age
Dr. Sahai is the scientific advisor to the National Authority for the protection and development of the Temple of Preah Vihear as well as for the APSARA National Authority